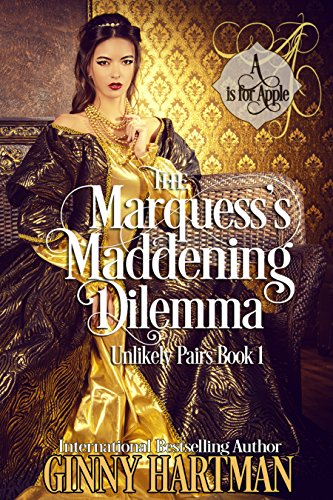 A is for Apple

She was like the forbidden fruit in the Garden of Eden.
Touching her was strictly prohibited, but that didn't take away the desire.

A is for Apple

She was like the forbidden fruit in the Garden of Eden.
Touching her was strictly prohibited, but that didn’t take away the desire.

Lady Alexandra Worthington has been betrothed to Lord Coldwell since birth, an arrangement that never bothered her until her parent’s unexpected death. Feeling as if she has no control over her life, Alexandra begins acting out and soon becomes too much of a burden for her brother, her current guardian, to bare, so she is sent to be under the care of her betrothed’s father, Lord Emberson.

Aaron Beaumont, the Marquess of Emberson, lives an orderly existence—nothing in his life is out of place. That is until Alexandra shows up and quickly turns his structured world upside down. Convinced he is a man incapable of passion, he soon discovers that isn’t true as temptation, in the form of a beautiful and lively girl, is thrust upon him.

The chemistry between the pair is palpable and soon leads to love, a forbidden union that can never come to fruition since Alexandra is legally betrothed to Aaron’s son. Can love find a way to conquer when legalities stand in the way?