The ultimate editor’s guide: when to use an ellipsis, hyphens, & more 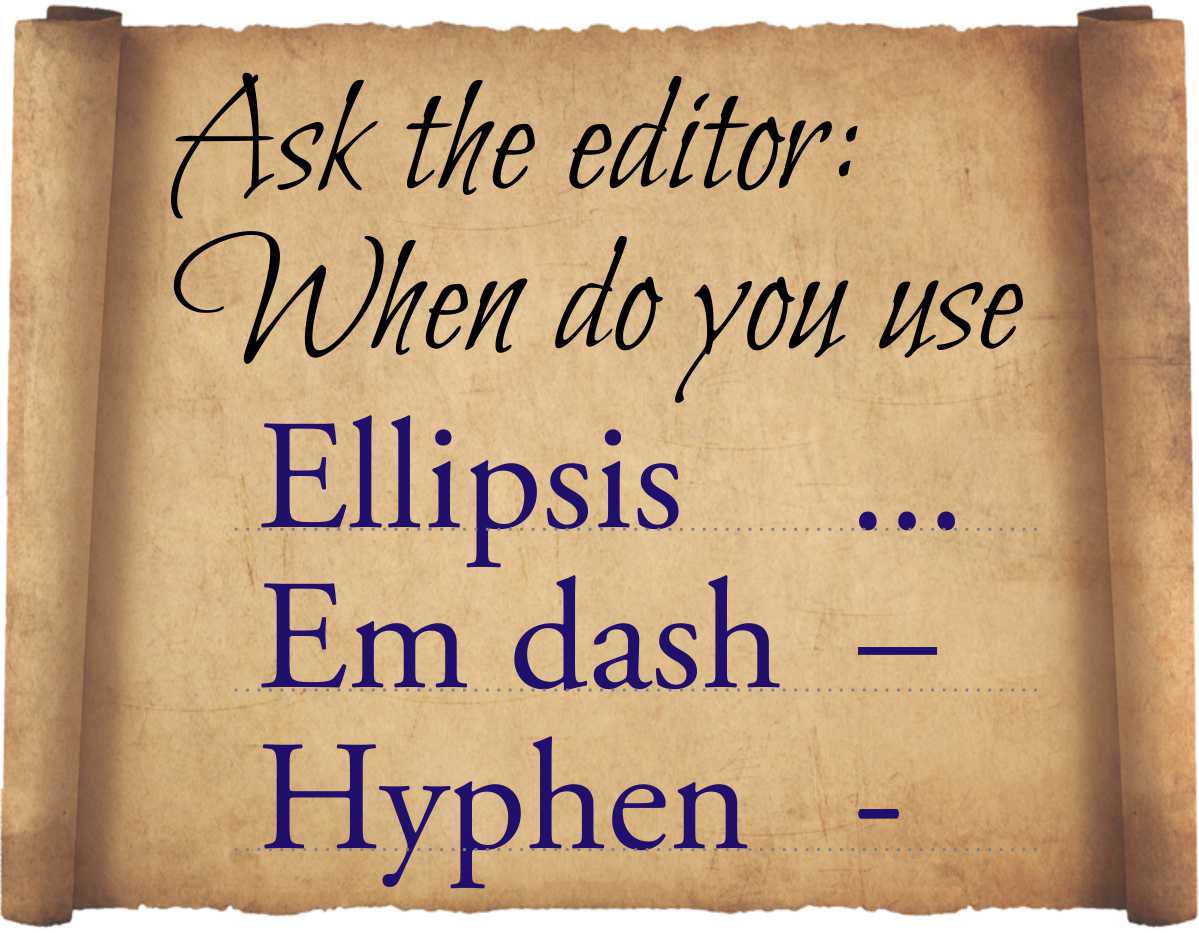 The English language is a wonderfully diverse medium in which to express yourself. It provides writers and editors with many punctuational options to enhance their sentences. But with so many ways to construct your sentences and convey particular objectives, differentiating when to use the right punctuation can be a challenge. Subtleties of the tools of grammar, such as the use of an ellipsis, em dash, or a hyphen, can be quite difficult to grasp and even harder to get right consistently. Luckily, we did the groundwork for you, determining the purpose for each of these grammatical tools, and the proper way in which to employ them. Read on to find examples for each syntactic mechanism:

a set of dots (…) indicating an ellipsis.

Ellipses demonstrate a lapse within a sentence. These three dots, which are represented as a single character in popular Word processors like Microsoft Word, serve as a pause in dialog or narration. However, these three dots are not a complete disconnect within a sentence. Instead, the sentence that specifically contains an ellipsis in the middle is connecting a point within a sequence, but takes a moment to pause between each thought or consideration. Here’s an example of proper ellipsis use:

“Well, what I meant to do was…I really don’t know.”

“He really didn’t…well, I mean…maybe he did do it on purpose.”

Ellipses also operate to structure sentences that have the intent of continuation, or a thought the author wants you to linger on a bit. For instance, you may write dialog or have a character internally ponder why something is the way it is. They dawdle on this concern, and the reader should do the same. To properly achieve this, include an ellipsis at the end of the sentence to convey that your narration isn’t done considering this point…

“I know I’ve seen him somewhere before…”

“I cannot believe we are doing this…!”

An ellipsis is created in Word by typing three periods consecutively. Word will then auto-correct those three individual periods into a single ellipsis character, which looks very similar to three dots but maybe more or less spaced out depending on the font.

a long dash (—) used in punctuation.

Distinguishing between when to use an em-dash versus an ellipsis or hyphen can get tricky. For one, they appear to serve and achieve the same grammatical purpose – a break. See what I did there? If I were to use an ellipsis, you’d pause while hanging on the word ‘purpose’ because you’re internally taking a break before reading the rest of the sentence, reaching the part where you finally learn what that grammatical purpose is. The em-dash emphasizes a phrase or expression to create an interruption in the middle of a sentence that contains two closely related points that do not syntactically fit – the em-dash is indicative of this dispersed or interrupted speech. Em-dashes allow you to veer off in a different but relevant direction, then return to the initial sentence purpose. The em-dash allows you to temporarily break off, then get back on track.

“I may have pondered – I may still be pondering – what it really means to be truly happy.”

“We both decided it was best to split up to find the missing key– and here’s the interesting part – in a way, it really wasn’t the best decision.”

Create an em-dash in Word by typing Ctrl+Alt+Minus (Option+Shift+Minus on a Mac).

the sign -, used to join words to indicate that they have a combined meaning or that they are linked in the grammar of a sentence (as in a pick-me-up, rock-forming minerals ), to indicate the division of a word at the end of a line, or to indicate a missing element (as in short- and long-term ).

Hyphens are complicated. Merely because two words seem to operate fine without them, even though they grammatically need it. Other times, two words do truly operate fine without a hyphen, though the author tends to stick one in there anyway. For instance, the phrase ‘in progress’ is one of the most common phrases in which writers attempt to throw in a hyphen, making it ‘in-progress.’ This is not necessary, for one simple reason: hyphens cement two words together. Not all terms need to be glued together, like ‘in progress.’ The gluing of these two words indicates to the reader that they are linked. Sometimes, hyphens are also used to provide clarity.

When a writer combines a noun or adjective with a present participle (a word formed from a verb) to form a unit of significance that describes another word, use a hyphen to make the meaning of that unit clear. If you want to create a well-formed sentence that properly connects two terms that are very much linked and need to be hyphenated for proof of this connection, put a hyphen between them

First and foremost, there should never be a space before and after the use of a hyphen. Second, hyphens are physically shorter than em dashes.

This list demonstrates three separate uses of hyphens. State-of-the-art and mother-in-law and Editor-in-chief demonstrate the “closely linked” words you describe.

Dog-friendly, factory-made, and 10-minute demonstrate the use of a descriptive phrase, where the second word is an adjective, and the first word is an adverb modifying the adjective. This format is almost always used before the noun.  After the noun, there is no hyphen. For example, “a factory-made tool,” but “the tool was factory made.”  If the hotel is dog friendly, it is a dog-friendly hotel.

The third use is in numbers from twenty-one to ninety-nine. Also fractions, as in “one and one-half.”

See? Hyphens aren’t so intimidating. In fact, hyphens can emphasize your words and help the reader see the association between two functions. The hyphen can serve to connect two words, and also separate syllables of a single word or phrase. When used properly, hyphens accentuate your sentences and, shall we say it, look aesthetically appealing! It is important to note, however, that hyphens should not be confused with em dashes (which is a longer line than the hyphen).

We hope this breakdown of grammatical instances and examples has helped you to understand and determine when to incorporate ellipses, em dashes, and hyphens in your written word. For another pair of eyes on your grammar, check out our editing services: https://dragonrealmpress.com/editing/